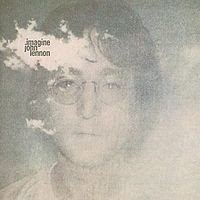 I tried to get into John Lennon when I was a teenager. I bought this record, and even had a book about it. And I found that Lennon's idealistic love-cures-all attitude just didn't work for me. Though I can see it now for what it is (a fine idea from someone whose life had no basis in the reality in which most people live), I still don't get much out of it.

I agree with what Lennon says in the song "Imagine." In theory, it's something worth looking at. It's a place to start, and I appreciate that. And it's a nice song. I also think "Jealous Guy" is a nice song. But for some reason, "All You Need is Love," which is arguably just as short-sighted and possibly less articulate, makes more sense to me. I think Lennon needed The Beatles. I like McCartney's solo stuff better than Lennon's, but heck, I think he needed The Beatles, too. When your ego has been boosted into the stars (and rightfully so, on both counts), your only hope is having someone you know around you to tell you what not to do. Someone who doesn't give a shit about your fame or your self-proclaimed genius. Ideally, dudes you've been in a band with since you were in short pants.

Not only did Lennon lose those dudes, he gained a girlfriend (wife, by this point) who seemed to be in the business of encouraging this self-obsessed malarkey. I don't deny that John Lennon was an incredible songwriter. I just wonder if people are afraid to admit that some of his solo stuff isn't quite as brilliant as they want it to be. Maybe I wasn't around when it came out and I don't understand the perspectives of those who regard it with such fondness. I remember thinking that "Imagine" was trite when I was 15. And I was highly impressionable in those days. Maybe it just wasn't ever gutsy enough for me.

The gutsiest song here (both musically and lyrically) is "How Do You Sleep?," which, while being arguably the best song on the record, is a bit sad to listen to. But, if you're into rock & roll diss tracks, it doesn't get much more big-time than that one.

"Crippled Inside"
Posted by Wockenfuss at 1:34 AM

I have to agree with you that this album just doesn't do it for me. Lennon's solo stuff, for me anyways, is pretty forgettable. It's like he took everything original and clever about himself and threw it away. I'm only happy that he did after the Beatles broke up, and not before. I really don't get how people have put this album on a pedestal because it is just not that good. Is it because the song was such a big deal? Not that I hate this album. "How?" is a pretty sweet song, as is "Jealous Guy." I must admit that I dig "Oh Yoko," but I always wish that it had different words. Some of McCartney's solo work is regrettable but he was definitely heads and shoulders above Lennon in the 70s.