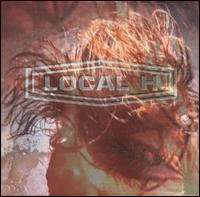 Local H switched it up in the aughts. For one thing, longtime drummer Joe Daniels left the group, and was replaced by equally hard-hitting Brian St. Clair. The lineup adjustment didn't change the sound of the band much, but they do seem more focused on separating the songs and allowing them to stand alone. While Pack Up the Cats was ambitious and meticulous in every aspect, playing out as a fine-tuned rock opera-ish thing, this record is more or less just ten big tracks, each within their own space, and each markedly different from the others.

If Local H is anything, they're consistent, and this record stands up well against any of their other work. "Hands on the Bible" is maybe the most well-known of the songs here (which, admittedly, isn't saying much) and it's uncharacteristically serious. It's not a bad move, and it's of course balanced out by the cheekier numbers, like "Keep Your Girlfriend Away from Me" and "Rock & Roll Professionals." Josh Homme shows up for a guest spot on the latter, and adds some of his trademark thickness to the song.

This album is also personally notable for containing one of my all-time favorite Local H songs, "Creature Comforted." I have a soft spot for rock songs that call out people that the singer perceives to be pussies, and this is really a top-notch entry into that legendary canon. ("Hey, come on/We're all defanged and declawed" - good stuff.)

I always forget how much I like this record. I bought it at a weird time and didn't really ingest it until a few years later. Another great album from this band that will forever remain unrecognized. If you want to strap on and rock, this ain't a bad avenue to go down. I'm just sayin'.

"Creature Comforted"
Posted by Wockenfuss at 1:48 AM