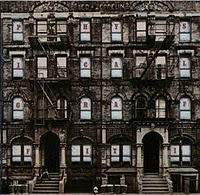 There are a few different ways to look at this record. Some might see it as the greatest achievement of one of the world's greatest rock bands. Some might argue that it's bloated, particularly noting that it contains songs from various eras, thus rendering it not very cohesive. But pretty much everyone agrees it's good. I also claim that it's good, and tend to lean more towards greatest achievement than bloated.

There's a bit of a White Album argument to be had when it comes to Physical Graffiti. "If it were just pared down to one great album..." Well, fuck that. There are some rough points on this record, but if you tried to trim it down to two sides instead of four, you'd be leaving out some stellar songs, no matter how you moved shit around.

Speaking of moving shit around: as with most Zep records, my biggest complaint with this one is the sequencing. Now, when you've got two eight-minute-plus songs and one that clocks in just above eleven, you've got some considerations to make. And, again, who the hell am I to tell Jimmy Page how to arrange his precious compositions? Still, I've always felt this thing didn't flow exactly right. But, wah wah wah. As it stands, there are four sides to this beast, each with their own set of ups and downs.

Side One starts with "Custard Pie," which is one of my least favorite songs on this album, and always struck me as an odd opener. A blues-based rocker leaning on a thinly veiled oral sex metaphor seemed to be well-trodden Zeppelin ground. So, for me, it's a lackluster beginning. "The Rover" picks things up, showing the poppier side of the band that was emerging as the 70's hit middle age. But it's "In My Time of Dying" that is really the focal point of this first side. At 11:05, it's Zeppelin's longest studio track, and one that takes some patience and stamina to stick with. Not my favorite song, but I definitely recognize its importance, and even its greatness. It's just loooong.

Side Two is relatively flawless. "Houses of the Holy," a leftover from the album of the same name, is groove-ridden but poppy, and hearing Plant sing extremely catchy lines about Satan is priceless. "Trampled Under Foot" is Zep at their most classic rock (up to this point), with Plant straining to be heard over a crowded mass of guitar riffs and organ noodling. It's more undefined than other Led Zeppelin songs, but it ends up being a nice change. Then there's "Kashmir." If you told me that you thought "Kashmir" was the finest thing the band ever did, I wouldn't argue with you. It's an immense, timeless song that will be around longer than any of us. And I'm actually being sincere when I say that. I can understand not liking Led Zeppelin. I have a hard time understanding not liking "Kashmir."

Side Three is a weird one for me, as it contains both my favorite and least favorite Led Zeppelin songs of all time. But before those, the second half of Physical Graffiti gets going with "In the Light," which I've always loved. John Paul Jones does some eerie "No Quarter"-ish synth work at the beginning, and Plant's vocal parts are incredible throughout. Another huge song, and another testament to how ambitious the band was getting as songwriters. It's followed by "Bron-Yr-Aur," a nice little acoustic instrumental that is actually Zeppelin's shortest studio track, at just over two minutes. They've got something for everyone here, folks.

And maybe that was the idea behind "Down By the Seaside," which is my all-time least favorite Led Zeppelin song. I don't know if they were trying to crack soft rock radio, or just feeling generally wussy, but I even hated this song when I was a teenager, and that's saying a lot. I was willing to go to the wall for Zep on pretty much anything, but the warbly guitars and unbearably shitty lyrics on this one were (and are) just too much for me.

Conversely, if I had to pick just one Led Zeppelin song to spend the rest of my life with, I think I'd pick "Ten Years Gone." To me, it's their perfect song. The guitar parts are intricate but not overly so, and Plant's performance on this song is just untouchable. And when Bonham kicks in after the first verse...yowsa. It's as good as it gets for me.

Side Four is solid, though maybe not up to par with the rest of the album. "Night Flight" is a good song, with the band trying to do a 50's rock sort of thing with it. "The Wanton Song" rides a tight riff that widens out in the chorus, and the organ part makes it much better than it would be without it. "Boogie with Stu" is a loose jam, and should have been a b-side. "Black Country Woman" is an acoustic jam, and a damn good one. It should have, in my opinion, either been the first or last song on this album. Probably last. But what do I know. Instead, "Sick Again" ends the album, and it's probably the most ass-rock song in the Zep catalog. Squealy. It doesn't really suit the band well.

So, sort of an odd end to a monster of a record. Is this my favorite Led Zeppelin album? Yeah, probably. There's just so much to it. And if nothing else, the LP art is extraordinary, which I've always appreciated.