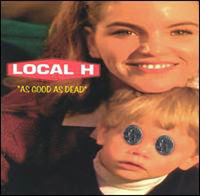 Go ahead and hate Local H. It only makes them rock more.

If you're comfortable with writing them off as the one-hit wonder behind "Bound for the Floor," that's fine. You're way off base and you're making a fool of yourself, but that's your right as a lazy music listener.

The funny thing is, "Bound for the Floor" was probably the first song I heard by them, and I didn't really care much for it. I don't have a problem with it, but it's neither representative of their sound nor one of their better songs. Fittingly, I cannot remember why I bought this record. I think it might have been after I caught the "Eddie Vedder" video on MTV (must have been one of the three times they played it), and just thought it was hilarious that they had a song with that title. Seemed gutsy. Seemed almost stupid. That works.

As with a lot of bands who had fleeting mainstream popularity yet still maintain an ardent fanbase, Local H is all about the deep cuts. The best songs on this record are the random ones, tracks like "Nothing Special," "I Saw What You Did and I Know Who You Are," and the blistering badassness of "Back in the Day." And while "High-Fiving MF" and "Fritz's Corner" are tailor-made for rock dudes to scream along with, they're also making fun of those same rock dudes. Yes, it's been done before (and yes, the Nirvana comparisons could go on for a while), but Scott Lucas has a way of making it not suck. Not sure how he does it, but though he comes dangerously close to letting his identity fade away into the murky sea of post-grunge, he somehow keeps his head above water.

It's fun to listen to, because honestly, this band could have easily been one that put out a few records and were never heard from again. Dude's a scrapper. I like that.

"Eddie Vedder"
Posted by Wockenfuss at 1:36 AM