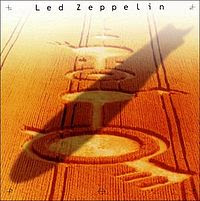 As a teenager on a limited budget, this was a sweet Christmas gift. These were some of the first CDs I owned, and having this much Zeppelin at my disposal wasn't bad at all. Looking back, I think this box set is relatively pointless.

Aside from the inclusion of "Hey Hey What Can I Do" and "Traveling Riverside Blues," two rare tracks (and both great songs), along with the short instrumental "White Summer," this is just album versions of Led Zeppelin songs, hand-picked and remastered by Jimmy Page. It's kind of chronological, but when it comes to chronology, it either is or it isn't: mixing together songs from roughly the same era but from different records is bush league.

On top of that, "Heartbreaker" is on here, but not only does "Living Loving Maid" not follow it, it's not even included. Weak. And while the sound on these discs was definitely a huge leap forward in 1990, any Zeppelin fan would have probably rather ponied up a little more dough for their entire discography, instead of just a large portion of it. Of course, this left the door open for other cash grabs that Jimmy Page would take full advantage of over the next two decades.

Zeppelin's an album band. A one-disc best-of for the casual "Stairway" fan makes sense. A 4-disc retrospective just reminds the hardcore fan what was left out: some of the deep cuts that give the popular ones more context.

I listened to this a lot when I was a teen, but after I picked up all their records on LP, it just didn't make sense. Though I still have it...