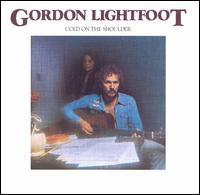 After finding that I actually enjoyed Sundown, I decided to try my luck with other Lightfoot releases. I picked up four or five other records from various eras, but I've since parted with all of them except this one. Turns out I only like Gordon Lightfoot circa '74-'75.

This album picks up where Sundown left off, maintaining the same basic arrangements and not changing much of anything. While not quite as strong as its predecessor, I still enjoy this record. "Bend in the Water" is jumpy and fun, and though "Rainy Day People" is crazy corny, it's a nice little ditty. After that, though, the album really hits its stride. The title track is the best song on the whole LP, and "The Soul is the Rock," despite its heavy title and lyrics, is a light and likable track.

Things slide into a bit of a country way after that, and that's tough for me to handle. The second side is decent, but it gets a little watered down by ambitious arrangements attempting to make up for melodies that aren't too gripping.

It's a narrow window for me and Gord-o. Think I'm going to keep it that way.

Here's a fairly recent performance of "Rainy Day People."
Posted by Wockenfuss at 12:56 AM