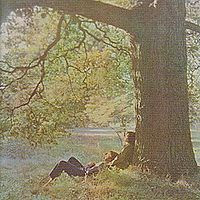 I'm going to tell you a secret: I don't like John Lennon's solo work as much as I feel like I should.

I own this record, and I have for quite some time. I don't remember when or where I got it, but I remember feeling an obligation to have a copy of it around. I still do. I did, however, recently part with my crap copy of Mind Games, as well as my copies of Milk and Honey and Double Fantasy. I hadn't listened to those last two in a decade, and the Mind Games LP was some Columbia House record club version, so that went straight to Goodwill. So, I'm down to this one and one other one, I think.

And it's not that I hate Lennon's solo work. It's just that I know if I listened to this record without ever having heard the Beatles, I wouldn't really give a shit about it. Songs like "Mother" sound self-obsessed and whiny to me, and the whole thing is reverb-happy and intentionally sparse. Why would I listen to "I Found Out" when I could listen to "Come Together"? Still, this album isn't far enough removed from the Beatles to really find Lennon losing his way, so there are, of course, some great songs here.

But, then he fucks them up with lyrics about Yoko. For some reason, hearing him complain about how he and Yoko can't get a fair shake in life ("Isolation") just rubs me the wrong way. In fact, hearing him sing about Yoko at all gets boring pretty quick. It's a shame, because "Well Well Well" is a sweet song. So is "Look at Me," but maybe that's because it sounds the most like a Beatles tune.

Believe me, I understand the brilliance of this record. And I do like it in moderation. I guess I'm just not a Lennon-solo kind of guy.