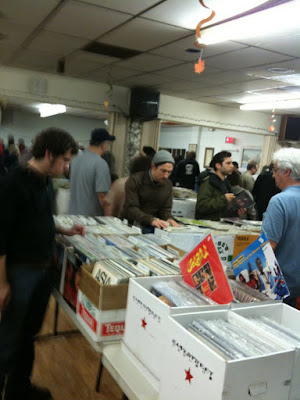 The air was damp, the nerds were stinky.

I just got back from the semi-annual Night Owl Record Show, and though I didn't spend as much time (or money) as I did last time I went, I still had a fine time. Not much had changed since last time. In fact, it was mostly the same dudes, in the same spots, selling the same kinds of music. But that's OK. The records were different. I think I only bought stuff from three different tables. Here's what I picked up:

Run-DMC - "Ghostbusters" 12": For some reason I have the 7" of this with no cover, so I decided for three bucks, I could step up to the 12" with the cover. This song is terrible.

Beck - Sea Change: I've been putting off replacing my CD copy of this for like two years. Finally found this at a decent price.

Fugazi - Red Medicine: Damn fine deal on a copy that looks like it's never been played. CD replacer as well.

Descendents - Milo Goes to College: Not an original copy. But for six bucks, I'll take it.

A Tribe Called Quest - Midnight Marauders: I originally bought a copy of Atmosphere's God Loves Ugly from this dude, but when I looked at it after I paid for it, I realized it was missing one of the records (glad I checked!). So, I went with this instead. Good one to have around.

UTFO - UTFO: An original, not-too-shabby copy of their debut. A five-dollar impulse buy, but I regret nothing.

Eric B. & Rakim - Paid in Full: Another one I had on CD. Seems so much more legit on wax. Looks way too clean to be an original copy, but I can't find a date that says otherwise.

N.W.A. - Straight Outta Compton: I was planning on holding out for an original copy of this, but eBay hasn't been kind to me on that front. Dropped a ten spot for this reissue from 2002. Gatefold, some bonus tracks. Would have rather had the original, but this'll do. I didn't even have this on CD. Can you believe that?

Atmosphere - The Lucy EP: 1/3 of what makes up the Lucy Ford CD, and now I'm searching for the other two. I was stoked to find this. The price is inflated on eBay. I got it for six.

The Beatles - Second Album and Something New: It's time to beef up my Beatles collection, and at this point I'm working within the confines of their U.S. discography. Once that's settled, we'll see what happens. These were both decent copies, but nothing fancy. I can't afford to be a serious Beatles collector. I shoot for nice versions, but nothing ridiculous. Dude who sold me these (gray-haired guy in the picture - wasn't he in the last picture, too?) had a Butcher Cover going for $500 that was in good shape. Seems like the price on those has dropped.

Anyway, that was my haul. I'm feeling good about it.
Posted by Wockenfuss at 9:28 PM