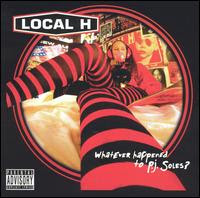 First off, the cover and title to this album are both fantastic.

The songs are damn fine too, and this record is much more Pack Up the Cats than it is Here Comes the Zoo. It's big, involved, and features some really short songs and some really long songs. Lots of variety, and lots of rock. The production value is somewhere in between, with most of the cuts sounding raw, though there are plenty of overdubs. It's a nice mix, and the recording ends up with a live-in-the-studio vibe that suits the band well.

Tracks like "Dick Jones" get more abstract than Local H ever has before, with the band bringing in a (gasp!) mellotron player to add some spacey depth to the loose riff. Does not sound like Local H at all, and though I respect them branching out, it's not really my cup of tea. Luckily they follow it up with the nutso-ness of the two-minute "Money on the Dresser" and the guitar almost-balladry of "P.J. Soles," a song with great lyrics that occasionally get lost in the mix, which is annoying.

"Buffalo Trace" is classic rock-y and, at over ten minutes long, a patience-tester. Still, it goes along with the vibe of the rest of the record, which is the band getting out of their comfort zone. Still, the songs that remain true to their sound (like the rampaging "Heavy Metal Bakesale") end up being my favorites.

Makes me think I need to rediscover this record and give it some more time.