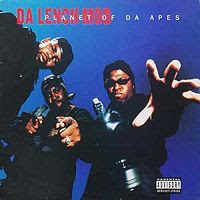 When I found Lench Mob's first record, this one was filed right next to it. When you get the chance to pick up a group's whole catalog in one fell swoop, you take it. So I bought their sophomore (and final) LP, having never even heard of it.

It's actually much better than I thought it would be, and it's more of a departure from their debut than I expected. Of course, part of this is due to the fact that original member J-Dee got convicted of murder between the two records, and here he's been replaced by Maulkie, a dude who can hold his own.

Like a lot of West Coast hip-hoppers in '94, Da Lench Mob adopted some of the G-Funk sound for this bad boy. But, some of their darkness remains, and those are the stronger tracks. "Cut Throats" features Dre-like squealing synths, and despite the presence of Mack 10, it's a starkly cool song. "King of the Jungle" sounds like a Predator outtake, working the same horn-wailing chaos as "Wicked." Speaking of Ice Cube, he's still down with Da Mob, and though his presence isn't felt as strongly on this LP, when he shows up he dials it.

Overall, this album probably isn't as strong as their debut, but it definitely proves they weren't content to fizzle out. The title track is a little too mellow for my liking, but "Goin' Bananas" brings the quickness, and "Environmental Terrorist" harnesses the anger nicely. Still, the G-Funk sounds a bit generic, and the tracks just don't hit as hard as they should. But, it ends up being a nice snapshot of a critical moment for West Coast rap.

"Goin' Bananas"
Posted by Wockenfuss at 1:55 AM