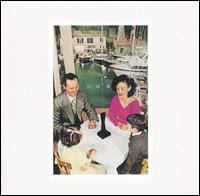 While Physical Graffiti would be Led Zeppelin's last truly great album (in my opinion), they still had some great songs in 'em. Presence is probably the strangest Zep album, in both content and album art. I enjoy the abstract art of the cover (centering around "The Object"), as I think it fits the scatterbrained vibe of the music quite well.

While this record is ultimately all about its centerpiece, the masterful "Nobody's Fault But Mine," the songs that surround it are strong as well. "Achilles Last Stand" is a complex rocker that changes speeds all over the place and features a bunch of different parts. At this point, the band makes it sound easy. One of the more underrated songs in their catalog. "For Your Life" holds a loose and thick groove, with a ragged Plant scratching his way through the phased vocals. A pretty sweet track. And yes, Stone Temple Pilots owe a lot to this track.

"Royal Orleans" is a decent stop-and-starter, but not one of the band's stronger tracks. Plant sounds especially spent on this one. Like I said, "Nobody's Fault But Mine," the opener on Side 2, is the jam on this one. It's another traditional blues jam that Zeppelin had their way with, and it's a thick bruiser, with Bonham pounding out the drum parts with complete fury. Any trace of Plant sounding tired isn't apparent, and Page's solo in the middle is clean and gets to the point.

The remainder of the record is a little disappointing after that. "Candy Store Rock" finds the band again trying to do a 50's rock thing, and the mix sort of fucks it. "Hots On for Nowhere" sounds like it should have been on Houses of the Holy, and it's another decent stop-starter, reminiscent of "The Ocean." "Tea for One" is basically "Since I've Been Loving You" part II, and I rarely ride it all the way out. Zep getting back to their roots. Fine for them; boring for me.

Not one of my favorite Led Zeppelin albums, but when people say it's underrated, I can see what they mean.

"Nobody's Fault But Mine"
Posted by Wockenfuss at 1:30 AM