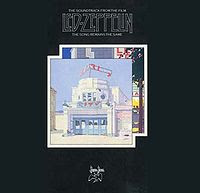 This is easily the Led Zeppelin album I've listened to least. Well, this one and Coda are probably tied for that honor, actually. Regardless, if you're looking for a 26-minute version of "Dazed and Confused," this is the place to go.

This is the soundtrack to the concert film of the same name, which is equally self-indulgent and overflowing with wank. Zeppelin was arguably at their peak around this time, and they were taking full advantage. Though, surprisingly, the excessive drawing-out of the songs is not really the problem with this collection of "live" recordings. The problem has always been, at least for me, that these performances just aren't that great. I was actually really disappointed when I first heard this, and was much happier to stick to the studio recordings.

On top of that, the song choices don't take any risks, instead opting for "Stairway to Heaven," "Rock and Roll," "Whole Lotta Love," and some other casual-fan-pleasers. The highlights are "The Song Remains the Same" and "The Rain Song," which aren't perfect, but back-to-back they're solid. "No Quarter" is also pulled off nicely, but even that track is missing the depth of the studio version.

My claim to fame with this LP is that the second record in my set has Side Four labels on both sides. No doubt this has something to do with Aleister Crowley, working his black magic again.

"Rock and Roll"
Posted by Wockenfuss at 1:52 AM