Stallion Alert at the Movies: Anvil: The Story of Anvil (2008) 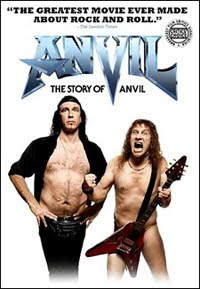 I kept meaning to Netflix this movie, and managed to forget for quite some time. I finally worked it into the queue, and I'm glad I did.

I have to admit, I didn't know jack about Anvil before I saw this movie. I had heard the name in some of my various metal travels, but had never heard the band. Thankfully, knowing anything about this band isn't a prerequisite for enjoying this movie. Their backstory is told in the first segment, and it gives you all the info you need to jump right to the present day and catch up with the main players.

The movie tells the story of an 80's band who now find themselves in their early 50's, still, against all odds and common sense, trying to make it in the music biz. It's sad, hilarious, depressing, uplifting, and really well made. Like any good documentary, the end is a great payoff, but it wouldn't be so without an interesting journey to the final scene.

I won't give too much away, but if you enjoy a good rock doc (or documentaries in general), this is definitely worth checking out. Great live footage, great archive footage, and personalities that are simply engrossing to watch. And seriously: it's a really nice story.

Also includes some worthwhile deleted scenes which, given the sub-90 minute running time of the film, should have been included. Still, who cares. Everyone's telling you this movie is great. They're right.

Official Trailer
Posted by Wockenfuss at 1:27 AM

The wife and I watched this last night and really dug it. I'm always amazed at how 50 year old dudes can still be waiting for their moment. It is sad and somewhat inspiring in an odd sort of way. My only wish is that the doc never allowed for the dudes to describe where they thought it went wrong. I spent the whole movie waiting for the explanation and it never came. I don't know about you but I find Lars Ulrich's nerdy knowledge of metal to be pretty awesome. The bonus interview with him was pretty interesting and made me hate him just a teensy bit less.