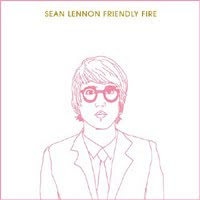 At some point, I got so tired of waiting for a follow-up to Sean Lennon's first record that I just sort of forgot about him. I was still a fan of Into the Sun, but it didn't seem like he ever intended to put out another record.

But, word finally started circulating in 2006 that he was prepping his sophomore effort. And not only that, but it was going to be a double-disc extravaganza with film-style videos for every song. Still doesn't quite explain an eight-year gap between records, but this whole project is almost impressive enough in scope to warrant a break that long. Well, maybe not quite that long.

This is Sean Lennon all grown up. The songs are bigger, more calculated, and very well executed. It seems that public opinion on this record was mixed, but that seems to be the deal with anything he does. Seems like everyone just thought it was good. I'd say it's closer to great. At the least, extremely solid, and much better than most of the crap invading major labels these days.

Honestly, at first it didn't live up to my expectations. I wasn't prepared for the wider scope he was taking with the lyrics and the arrangements. But I eventually became excited by the fact that it hadn't reached out and grabbed me like his debut did. I was right: I've ended up loving this record, and I still get a lot of mileage out of it. Its density is confusing in spots, but he thins it out sporadically and a nice balance is set. The whole thing works.

I haven't watched the DVD part in a while, but I remember thinking it seemed a little self-indulgent. Lindsay Lohan's in it, I think. That's no good.

But the songs are.

"Parachute"
Posted by Wockenfuss at 1:31 AM