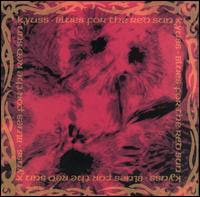 I'm fairly certain my introduction to Kyuss was the "Thong Song" video, which was in steady rotation on Bohemia Afterdark for a month in 1992. My interest was piqued (because that song rules), but when my brother and I heard that Kyuss would be opening the Faith No More show we were going to in January of 1993, we became even more intrigued. In addition, Dave Grohl had recently told Spin that they were one of his favorite bands. The buzz was brewing.

I don't remember a whole lot about seeing Kyuss on January 17, 1993 at the EMU Ballroom in Eugene, Oregon, but a few things stuck with me: I know that when we arrived, they were already playing, and we were pissed that we had come in a little late. I remember that they didn't play "Thong Song." However, we theorized that maybe they played it early, and we had missed it.

What I mostly remember is that they were the loudest fucking band I had ever heard. Like head-imploding, make-you-queasy loud. It was uncomfortably awesome. They remained the loudest band I had ever seen live until The Hellacopters made me literally deaf for three days after I saw them in 1999 or 2000. Of course, Kyuss was playing in a much bigger room, so it's hard to say who was technically louder.

It's stupid that I don't own Wretch, which is the album that precedes this one. It's not quite as good as Blues for the Red Sun, but it's worth owning. I'll get around to buying it. But this is the first big-time Kyuss record, and it's positively huge.

Throw away the pointless "stoner rock" labels for now, because this record really isn't about that. I mean, if you're going to call anything that, this would be the album to start with, but lumping this in with Monster Magnet is a huge fucking mistake. This is the smartest dumb rock of the 90's, a bunch of young kids who created some huge riffs and partnered them with vocals and lyrics that couldn't have served the mountainous guitars any better.

This record is just a great rock record. It's intricate, it's noisy, it's everything that good rock should be. There are five-minute-plus songs and there are less-than-a-minute songs. There are long instrumental breaks and there are choruses that get beat into your brain. They all blend together to form one big song anyway, so it barely matters. There is a song at the end that is just John Garcia saying "yeah" once. The song is called "Yeah."

Sure, this is where Queens of the Stone Age started, blah blah blah. Kyuss is its own beast.

"Green Machine"
Posted by Wockenfuss at 1:17 AM