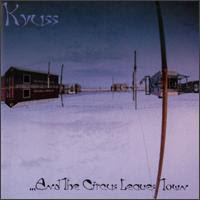 With an album title like that, it's no surprise that Kyuss broke up right after this album was released. However, I've never felt like this record was one of those contract-fulfillment phone-ins. The band sounds just as focused as they did on their previous records and the jams, while sprawling and lengthy, are mapped out and tight.

"Hurricane" and "One Inch Man" are vintage Kyuss: Thick riffs over steady beats, with Garcia's vocals almost buried in the back, like he's screaming to be heard. The next two tracks are sludgy and thick, mostly instrumental, and quite badass. "Phototropic" shows early signs of Queens of the Stone Age in its first half, but then crashes into a huge wall of fuzzy guitars.

The rest of the album is all over the place: lots of instrumental sections, but also parts where Garcia does more singing than screaming. It's a nice change, but also sort of a bummer when you consider that their songwriting wouldn't have any more room to expand. I guess that's what QOTSA was for.

Regardless, while this may not be their strongest record, it's definitely not a bad one. It's musically intricate, and takes some real time to get to know. And that's always a good thing.

This is my favorite Kyuss album. I think it's because it's the only Kyuss album I owned until we moved in together. I used to listen to it constantly, much to my roommates chagrin.