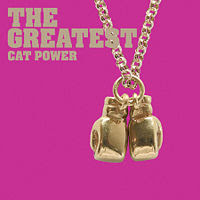 I'm not a Cat Power purist, and if I were, I might not like this record as much as I do. Chan took her songs to Memphis, hired some slick studio cats, and polished the shit out of 'em. Sounds like it shouldn't work. For me, it does.

Things start slow, with the title track easing you into the new sound, before things get full-blown on the second cut, "Living Proof." The production is sufficient enough to mask how much is actually going on: there's piano, organ, guitars; a lot more than you'd hear on a "normal" Cat Power record. It somehow sounds right, though. You start to realize her voice is made for this kind of Southern sensibility. A song like "Lived In Bars" has a genuine timeless feel to it.

I'm a big fan of "Could We," a song that is the most blatant in its attempt to mirror the sounds of 60's R&B, and also the most blatant in its attempt at some pop appeal. It's about a minute too short for me, but the running time goes right along with the whole vintage-single feel. Things get a little slow after that, but it comes back around at the end.

"Hate" is out of place on this record, sounding like a lost song from the You Are Free sessions. It's dreary and noodly with the guitar, like a lot of good Cat Power songs. "Love & Communication" is a mix of both styles, taking her initial approach and throwing some small string parts on it.

Like I said, I have no attachment to the "real" Cat Power stuff. So, I don't have a problem going down this road, which I'm sure a lot her fans viewed as a huge sellout. But that's me, I'm without scruples.

Dude, enough with the Cat Power. Also, you spelled "made" m-a-i-d. I am shocked. Is there nothing to believe in anymore?