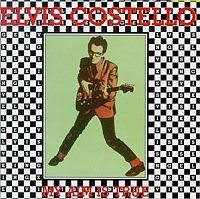 I just bought this one, so I may not have a huge amount of substance with which to discuss it. But, some things can certainly be said.

It's a monumental album, if for no other reason than it's the beginning of what would become one of the most celebrated music careers of the last 30 years. Fittingly, you don't need to strain to hear the potential here; these songs are as well-crafted as you'd expect them to be. They're also full of what would become Costello's trademark: dire bitterness disguised as pop-laced love songs.

Of course, this is exemplified exceptionally in one of the tracks his name has become synonymous with (and the one from which he lifted the title of the LP): "Alison." It's too easy to suggest that the titular line from the song indicates his wanton urge to commit murder, and really, I think that's a stupid summation of the overall theme of the song. It seems much more likely that it's another Costello classic: a beautiful song about love lost and chances blown. Either way, that's how I choose to listen to it.

"Watching the Detectives" initially struck me (this was years ago) as a sinister song, telling the tale of a murderer returning to a crime scene. A closer listen dispels this theory pretty quick, but it might still be a testament to how coolly intricate and unnerving the lyrics are. And what a bizarre melody. I used to watch people famously stumble over this one in karaoke. It's deceptively difficult to get the whole thing right. Another indicator of what a great song this is.

Was this record the first popular use of the term "Less Than Zero"? That's a pretty sweet cut, too.

Posted by Wockenfuss at 1:38 AM