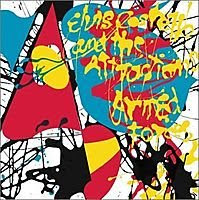 I think I may have spoken too soon. In my haste to love the shit out of This Year's Model, I fear I forgot how much I love this one. So, I think we have a new front-runner for my favorite Elvis Costello record.

The first three songs on this one are about as good as the man gets. It goes without saying that "Accidents Will Happen" is a classic. But damn, I really flaked on recalling what a fantastic song "Senior Service" is. Another two-minute Costello Classic. Those two are followed by the equally great "Oliver's Army," a song that takes a turn towards the serious lyrically, but maintains all the catchiest aspects of the two songs that precede it.

The record just goes from there. If you ever wonder where They Might Be Giants stole the melodies for at least three of the songs from Flood, just take a listen to "Green Shirt." And that's not a knock on Elvis or TMBG. It's a great song.

The second side doesn't relent, offering up songs that are just as passionately catchy (and how doesn't love a reggae-tinged tune called "Two Little Hitlers"?), finally wrapping everything up with "(What's So Funny 'Bout) Peace, Love and Understanding," a song that we all know. It's not one of my favorite Elvis Costello songs, but it works great as a coda on this collection.

Costello's pulling a Cars: cranking out a great record every year, starting in the late 70's and barreling towards the 80's. Let's see where it goes. (Though I should mention it won't go a whole lot further, because I am sufficiently short on later-era Elvis Costello. But I've got a few more in store.)

"Oliver's Army"
Posted by Wockenfuss at 2:01 AM