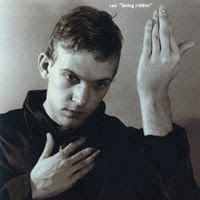 At some point (I think it was on the record between this one and Oops), Cex decided to start rapping. It's a huge change from the previous two albums I wrote about here, clearly. Not only has he gone from full-on instrumentals to tracks that are filled to the brim with vocals, but he had to change the music to allow ample space for the words.

The shift in direction is actually a likable one. I can't bring myself to love this record, but I do like it. His rhymes are odd and ambitious, and this really has very little to do with traditional hip hop. The production is intricate without being too busy, and though this should come off as pretentious (he's got that air about him), it really delivers a feel that is more fun than anything else.

Tracks like "Earth-Shaking Event" are the closest he comes to working some obvious nods to old school rap into the proceedings, but it's smart enough in its jocularity that he doesn't need to legitimize it. The breaks are filled with plenty of electronic elements to remind us who we're listening to.

If you can get on board with his "your girl loves my style" style, then you're good to go.

"Stamina"
Posted by Wockenfuss at 3:06 PM