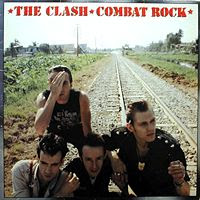 Pretty sure I picked this one up, bargain cassette style, when I was about 14. Perfect timing.

The Clash were one of those bands I constantly read about in rock magazines (for a long time, London Calling was widely considered the most important rock album ever by both Spin and Rolling Stone), so it was an inevitability that I would end up checking them out. I started here, which is a bit of an odd choice considering it's their penultimate album, and the last one with the original lineup.

While "Should I Stay Or Should I Go" and "Rock the Casbah" were immediately appealing to my young ears, it was always the deeper cuts that could be listened to repeatedly. "Overpowered By Funk," as corny as it is, really got a hold of me with its bizarre rap interludes and staunch repetitiveness. And "Atom Tan" is two and a half minutes that I may never get sick of.

I don't have to tell you what a classic record this is. Taken into consideration next to some of the more "pure" Clash records, I can see why some might feel they compromise a bit of their edge on this one. But fuck it, they had earned it. If they wanted to bring some horns in and dick around, more power to 'em.

"Straight To Hell" has recently gained exposure from that hacky M.I.A. song that doesn't even bother to get any more creative than just looping the first 10 seconds over and over, but if we can act like that never happened (and we should), we're left with one of the most beautiful songs to ever be produced by a band that was ever considered "punk." I would have put it at the end of the record, but when you hear "Death Is A Star," you realize there's nowhere else that one could have gone except the very end. Plus, this was still in the age of vinyl, so "Straight To Hell" does the next best thing and closes out side one.

This record helped me through a lot of high school. My first band even did a horrible cover of "Know Your Rights."

"Overpowered By Funk"
Posted by Wockenfuss at 1:19 AM