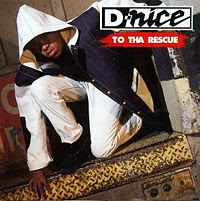 Look out, D-Nice has got a fresh new look. What a difference a year makes.

In 1991, NWA released Efil4zaggin, and it debuted at #1 on the pop charts. So, that should give an idea as to where hip hop was at at the time. Hence D's hoodie and lyrics in the first track about smoking some pot and washing it down with a brew. It's not a complete 180, though. "Rhymin' Skills" sounds like it could have been from his first record, and once you get past KRS-One's annoying raga yelling, it's a pretty good song.

"Time to Flow" features Naughty By Nature, and when Treach trades verses with D, he makes him look like a rookie. The beat is pure piano-laced Naughty, and it's possibly the best song on the record. In a bizarre move, "Time to Flow" shows up again six tracks later, as a remix (barely, and it's not listed as such) with Treach's verses omitted. Maybe D knew that he was getting shown up. Still, weird. (Especially considering there are still two songs after it.)

"Check Yourself" is a duet with Too $hort, and it's really not good. "Fuck a bitch and that's the goddamned truth"? Brilliant, Short Dog. The beat's not great either, and that's a problem with a few of the tracks on this one. In his attempt to be "harder," a lot of the more melodic loops have been replaced with heavy drums and static bass, and his voice just isn't enough to make up for it. But, that's only on a few cuts, and most of this album is good enough. It's just odd to hear this guy all of a sudden tossing the eff word around and coppin' some 'tude.

It must not have worked, as this was D-Nice's last solo record. I know he had a falling out with BDP, maybe that queered the deal. Who knows. Shit, dude's not even 40 yet. I'll hold out for a comeback.