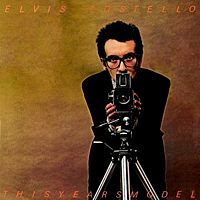 I've always wanted to be a huge Elvis Costello fan. I'm very capable of enjoying his music, and whenever I pick up one of his records I don't already own (of which there are far too many), I'm never disappointed. But, his music has never been able to fully elicit that all-consuming obsession I've seen in many people, including my friends.

This record is as close as he's come for me. I was late to the Elvis Costello game, not really getting into this LP until my early 20's. I think this was the first full album of his I owned, and I liked it so much that I was afraid to get another one. I've since overcome that fear (as we'll see in the upcoming entries), but I don't think any of his other records have surpassed this one for sheer likability. There's not a bad song on this one, and since I have the US version, it includes "Radio Radio" as the last track, which is a favorite of mine. (I know, real original, right?)

This record's short, a little over a half hour, and it's another album that benefits from brevity. A song like "No Action," the opener, is powerful, but the fact that it's not even two minutes long makes it pack even more of a punch. These are songs that could be construed as cynical, but they're also fun: I can't imagine how many parties "Pump It Up" was played at, well into the early 80's.

Costello was blessed with a voice that is unmistakable, and it makes his presence, aided by fantastic lyrics, immense in these songs. Combined with that lurking organ that pokes through over the purposefully thin guitars, it makes for a sound that is unique, and to some, probably a bit off-putting. But once you learn to like it, it makes perfect sense. His nasally singing makes his jealousy and thinly veiled semi-whining seem endearing.

It also makes his anger in "Radio Radio" only noticeable if you're paying close attention. It's one of those amazing songs that was based clearly in protest and serious frustration, but if played in a top 40 format, could easily fit in as a peppy little pop number. Tough to do that.

I can't believe I own this but not his debut (this is his sophomore LP). Add another one to the list... (EDIT: got it. See below.)