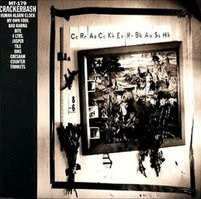 Crackerbash were one of those NW bands in the early 90's that was as good as a lot of the groups that got major label deals, but for whatever reason, they remained on the fringe. Maybe they wanted to. It wouldn't surprise me.

I may have seen them more than once during those magical 90's (oh, how I've romanticized the era), but I only clearly remember seeing them once. I drove down to Corvallis with my girlfriend (this must have been in '92), where we located a ramshackle warehouse type operation that was hosting a rock show. It was the Supersuckers (that's why we were there), Drive Like Jehu, and Crackerbash.

The ceilings were low, and Crackerbash's lead singer Sean Croghan was spazzing out, leaping all over the place, stomping back down, screaming in the general direction of the mic and sometimes hitting the mark. It was impressive. I remember they had a big fat drummer, a guy who sweated his ass off, looking like Tad and really beating the shit out of the drums.

I bought this on CD shortly after, enjoyed it, eventually gave it to my brother, and ended up regretting it. I found the LP at Ranch Records in Salem last year, and I'm happy to have it back on my shelf. These songs probably aren't for everybody, but if you can get into Croghan's vocal delivery (you can't understand a word he's saying), this is some hot shit. "Human Alarm Clock" and "Jasper" are the initial standouts, songs that could make it onto any legitimate best-of-the-NW-90's comp. But some of the deeper tracks are just as good, taking some weird chances and always paying off.

Some great yelping, too.

"Orion" (This isn't from this record, but it's the same era, and the only thing I could find.)
Posted by Wockenfuss at 2:23 AM

I don't have this. I wish I did. I think you sold it. Or else I lost it which I don't normally do. Either way I would love to hear it again. That cover reminds me of being young and in your bedroom when you weren't home. What!