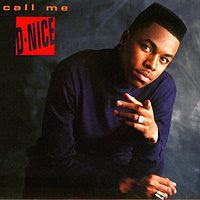 In 1989, I picked up a cassette single for a Boogie Down Productions song called "You Must Learn." I realized quickly that I didn't really like KRS-One's preachy bullshit, but I did like the last track on the single, a tacked-on preview of the upcoming D-Nice LP, a song called "And You Don't Stop." I ended up fast-forwarding the tape to that song more than listening to the BDP tracks.

I don't remember exactly when I picked up this CD, but it wasn't until years later. D-Nice's sound is very 1990 hip hop, which is a good thing, but it tends to sound more dated than a lot of other rap from the era. Though he never obsessed about being on the positive tip, his raps do sound a little soft. For me, the subject matter's not a problem. But, his rap style leans towards being a little simple sometimes, and kicking rhymes about rocking the party wasn't exactly the hottest angle in 1990. But, he did have some success with this one. (Being uber-hyped by KRS-One probably didn't hurt.)

It's also worth mentioning that he was barely 20 when this was released, he produced the entire record by himself, and the beats are, while not super complex, really catchy and make good use of the huge samples they use.

D-Nice refers to himself as the TR-808 (the name of the drum machine he programmed his beats with), and that moniker gets a little old after a while, and songs like "Pimp of the Year" just don't match up with that senior portrait-looking nice guy on the cover. So, he's still finding his footing. I was excited to see that "And You Don't Stop" makes an appearance on this record, rounding it all out. He just changed the "Fresh for '89" line in the beginning to "Fresh for '90," and he was good to go.

I really need to get this on vinyl. Add it to the list.