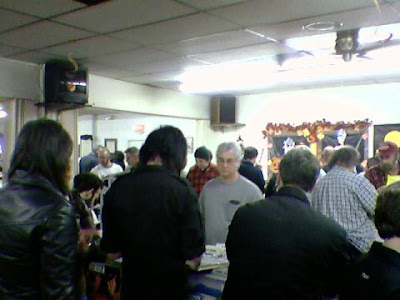 Yesterday evening at 5PM, myself and a few hundred other record-obsessed hopefuls packed into the Elks Lodge on 49th and SE Hawthorne for the twice-yearly Night Owl Record Show.

This was my first time attending, and I was looking forward to it. I planned to go in April, but the day of the show rolled around at a terrible time, and I didn't have a dollar to spend on vinyl. So, rather than showing up and torturing myself by browsing through records I couldn't purchase, I opted out, deciding instead to wait for the Fall show. I didn't miss it this time: I was in line with the rest of the stale-smelling elite, right at 5, two bucks in hand, ready to get my fingers dusty from the flippin'.

The room was tiny and the place was packed. The Elks has a small meeting room that's connected to a bar where apparently they specialize in non-stop deep frying. So, every once in a while, a breeze would waft through carrying a scent that combined fries, b.o., cigarettes, cheap beer, and other indistinguishable items that were also being deep-fried. Combine this with the inimitable scent of old records and being sandwiched between a couple of obese and hirsute sweaty dudes, and you've got yourself a party.

I roamed from table to table at first, picking up a few quick things but mostly just surveying what was up for grabs. It was hard to get a good spot at a lot of the tables, so I spent a good portion of the first hour jockeying for position and looking for small windows of space in which to squeeze through and command a crate. Pretty soon I had a healthy stack o' wax tucked under my arm, and eventually took an elderly dealer's offer of a double-bagged plastic sack to corral my loot.

I lasted about two hours, after which a lot of the dealers were getting drunk and annoying, and my patience with a few of the crazies who had shown up was wearing dangerously thin. I had spent my limit anyway, and felt good about walking away when I did. I looked through all the crates I wanted to get to before I got out of there. Here's a (most likely incomplete) list of what I got:

Whodini - Escape
Whodini - Back In Black
Whodini - Open Sesame (sealed!)
Aweome Dre and the Hardcore Committee - "Frankly Speaking"/"Executioner Style" promo 12"
N.W.A. - Eponymous debut (Note: this is not the NWA and the Posse record. It's before that, and though it has the same picture on the cover, it only has songs by NWA, and features both "radio" and "ruthless" versions. I had never seen this record before.)
Afu-Ra - Body of the Life Force
Super Lover Cee & Casanova Rud - Girls I Got 'Em Locked
Big Scoob - Champagne on the Block 12"
Beastie Boys - She's On It 12"
Run-DMC - Tougher Than Leather
Elvis Costello - My Aim Is True
Elvis Costello - Trust
Talking Heads - Stop Making Sense (limited edition with 12-page booklet)
Frank Zappa - Waka/Jawaka
Frank Zappa - The Grand Wazoo
The Mothers - Mothermania
Time Zone - World Destruction 12"
Eminem - The Marshall Mathers LP (I'm slowly replacing all my CDs with LPs)

I saw two copies of the Melvins' Ozma; one was 40 bucks and the other was 60. I couldn't do it. Also wanted a couple of super rare Talking Heads bootlegs from the late 70's, but they were in the 35-40 dollar range as well. I couldn't do it. There was a copy of Bukowski's Hostage record, too. 60 bones. 20 and I probably would have pulled the trigger.

Anyway, that's how it went. I hate everyone, but if I'm going to be in a crowded room full of people I hate, being immersed in a sea of record nerds would probably be my first choice. Great conversations and lots of looks of terror and satisfaction.

Nice work, yo. That N.W.A. record sounds like the true score of the bunch. Also nice work on the Awesome Dre and Time Zone records. Your ascendency to nerd-dom continues.