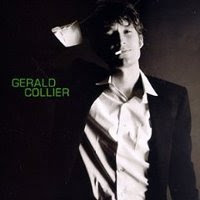 You remember Gerald from my various posts on Best Kissers in the World. This is his first solo record, a great little album that finds him bridging the gap between the Kissers and what would eventually become more of a country sound. I hate the term "alt country," but wouldn't say parts of this record don't exemplify a lot of the traits associated with that term.

That's a good thing: his voice works perfectly over guitars that are more twangy than distorted. "Whored Out Again" is a track that wouldn't have been out of place on the later Kissers stuff, but here it's given a bit of a slide guitar treatment and might be a little more reserved than it would have been with his former group. Great song.

The subject matter on this one is a lot like the Kissers stuff as well, but given the country-ish backing tracks, the feel transfers over without a hitch. He's heartbroken, swearing a little bit, writing lyrics that are consistent with themes of love lost, but his approach is way more ambitious than that. On "Truth or Dare" he says "I'd like to sleep around, but no one calls anymore." It then trembles into some dreamy guitar lines that echo the sentiment flawlessly.

Damn, listening to this reminds me of his other solo records I don't own. Another thing to add to the list. This is another Collier work that sadly resides in a lot of bargain bins. Snatch it up, it's more than worth a few buckaroos.

"Don't Discard Me"
Posted by Wockenfuss at 2:39 AM