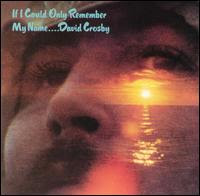 I was watching VH1 Classic last year, and for some reason I was sitting through a vintage acoustic performance by David Crosby and Graham Nash. Not typically my favorite kind of music, but if it's live (and old), I don't mind it. Plus, I read David Crosby's autobiography some years back, found it quite interesting, and hoped to at some point gain an interest in his music.

It wasn't really working for me, but when it came time to wrap up the performance, Nash coyly asked Crosby if he would perform a new song he'd been working on. Crosby seemed sheepish (I guess that's what you call making a series of alien noises), though I'm sure this was all planned, and he agreed to do it. It was called "Traction in the Rain," and about 30 seconds into it, I realized I loved it. It's a mostly empty number, just some vacant chords and a stirring melody. The lyrics are strange but make perfect sense in the context of the structure, and Crosby's voice is eerie, flighty, but dead on. Impressive, especially considering he seems stoically zooted during the performance.

I rewound it a few times, found it on YouTube after that, and developed a little thing for it. I put it on my always-crowded mental list of records to look for when I'm out shopping, and of course, had a hard time finding it. I figured it'd be cinch. I didn't try hard (didn't want to resort to eBay for this one), but a few months went by and I had yet to see it. I eventually found it at Everyday Music in Bellingham, Washington, when I was up there for a visit. Since then, I've seen it at least five times since, selling for less than I paid for it, and missing the tear mine bears in the top left corner. This is the way it works.

Calling this a "solo" record is completely inaccurate. There's about twenty guest people on it: members of the Grateful Dead (ick), Joni Mitchell, Nash, Neil Young, and a bunch of others. So, it unsurprisingly delves deep into some drug-induced hippie bullshit that I just can't get behind. But, there's a few good numbers other than "Traction."

If I was cripplingly stoned in 1970, this would surely be my soundtrack when I wanted to "mellow out."

"Traction in the Rain"
Posted by Wockenfuss at 11:57 PM