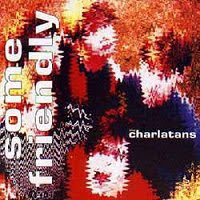 I was an impressionable youth. All it took was a cool band photo and some encouraging words from Spin magazine, and I was sold.

So it went with the Charlatans UK, a band that served as my formal introduction to Brit rock and, more importantly, the "Madchester" sound. I tried around this same time to embrace Inspiral Carpets, Primal Scream, and especially The Stone Roses, but it was always this record that really did it for me. I liked the Happy Mondays, too, and though they may have been geographically related to these bands, their sound was very different.

The Charlatans were the dictionary definition of a "buzz band" at the time, a group who had barely been together for a year, scored a hit single, and quickly churned out an album. If they rushed through any of this, I certainly couldn't have heard it in the early 90's. I loved (and still do) every song on this record. I think their liberal use of organ appealed to me because of my Doors-heavy upbringing, but the thing that really sucked me into this record was the melodies. Tim Burgess never struck me as the best singer, but his vocal lines were so defined and so deliberate, it was almost like he was intentionally restraining himself, holding back lest he become too enthused. (Liam from Oasis would later do this, much more blatantly and far less successfully.) It was strikingly nonchalant and endlessly cool.

As with any great record, the songs here that clearly represent "the singles" are the weakest of the bunch, or at least the ones that grow tiresome the quickest. Tracks like the almost seven minute "Opportunity" or the uncharacteristically bass-heavy "Flower" have much more staying power. They also smartly pack the middle full of two of the best songs on the record: the one-two punch of "Polar Bear" and "Believe You Me" at tracks seven and eight keeps the flow from ever coming close to stalling out.

I bought an EP they released after this, loved it, lost it, and by the time they released their proper follow-up in '92, I was deeply immersed in the NW rock scene and, though I stared at the bananas on the cover of Between 10th and 11th many times in many different record stores, I knew there was no chance it could live up to this one. It's a tall order: I've been rocking this one for 17 or 18 years and I can still enjoy it, beginning to end.