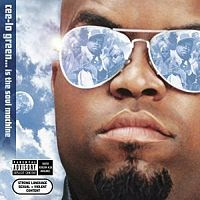 Somebody didn't like the direction of Cee-Lo's first LP. Whether it was Cee-Lo or the label (my knee-jerk reaction is to blame the label, or one of the "suits" somewhere), there was clearly a decision made to make his follow-up a lot more palatable.

You don't even have to listen to a song to see what's going on. When you see the names Timbaland and Pharrel on the back of an LP, you know the deal. Somebody's banking on some hits. Add "featuring TI" and "featuring Ludacris" to the mix, and it's looking doubly true. So, about a quarter of this album is smellin' like it's fresh from the hit factory.

The good news: the Pharrel tracks are actually decent. I've never cared for that dude as a rapper (and especially as a "singer"), but he can put a track together if he doesn't go overboard. The couple songs he produces with the Neptunes here are absolutely fine. "The Art of Noise" works some slight pop angles, but never starts beating you over the head with how likable it's trying to be. And the hook isn't stupid. "Let's Stay Together" sounds a lot like the title, a throwback soul number that makes for a solid cut deep into the album.

"I'll Be Around," the track produced by and featuring Timbaland, is about as crappy as any other Timbaland number. Thinly veiled sexual innuendo, overpowering bass, and melodies that have been used a hundred times. Cee-Lo's raps on the track are dope as shit, but he can't save it. "Childz Play" with Ludacris is about the same, a half-baked club jam that is tolerable until Ludacris comes in and starts sucking all over the place. And TI? Gimme a break. It's embarrassing that he's included on a record as otherwise legitimate as this.

That bullshit makes me like his first LP even more, even if it's strictly for the lack of big name ringers. But, he still gets weird on this one, even if the beats are almost all a lot cleaner. I am always so happy to see Big Rube's name on the back of a record. Dude can rap-talk better than anyone, and for some reason, I could listen to him ramble on about whatever nonsense he's spewing for days. It's why "Scrap Metal" ends up being one of the best songs on here. Rube kicks some knowledge at the beginning, the beat is dark but leaves plenty of room for vocals, and Cee-Lo sounds crazy angry on the hook. It's pretty sweet.

And there's plenty of other songs like that throughout the record. Seems like Cee-Lo gets back to rapping a little bit more, and by letting some other producers in on the action (especially Organized Noize), this record sounds a lot more diverse than his first one. I'm still not sure it's better, but it's different, which is good.