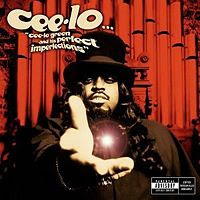 Cee-Lo ended up being the Andre 3000 of Goodie Mob, the guy who grew tired of the confines of Southern rap and wanted to strap on a wig and get freaky. Fair enough.

The dude's got a versatile voice, good for rapping and singing. He does both on this LP, and though it's not quite as good as he wants you to think it is, it's way better than anyone could have predicted. The beats are a mix of old soul and modern-era Dungeon Family, heavy on the horns and hard with the drums. Cee-Lo knows his way around music like this, and when it comes to writing a hook, he doesn't have any problems.

The usual subjects are covered (fucking, spirituality), and though his lyrics are often rehashed versions of classic cliches, he mixes it up by throwing in some straight up weirdness and vamps that are bizarre and entertaining. And, like I said, he can rap and sing. His raps are sparse on this one, and when he gets into 'em, it's a different vibe than he carried with Goodie Mob or his guest spots on Outkast songs. He even says "I am not one of those thug rapper guys" on "One for the Road," a song that seems to both lament and attempt to breathe life into the current state of hip hop.

- There are 21 tracks listed, but five of 'em are "breaks," the longest of which is 22 seconds long. No need to list those as songs. So, really there's 16 songs. That's averaging almost five minutes a song. So, I guess I'm restating my "it's long" point. And I don't mind long records. But some of the better songs on this one are tucked away at the end, and it's a shame.

- No Outkast. But Big Gipp makes an appearance, so that's pretty good.

Overall, a good record. But, you get the vibe Cee-Lo fancies himself some brand of madcap genius, and at some point, it's really off-putting. He's a good singer, a decent lyricist, and the guy can write a song. Let's not get carried away...