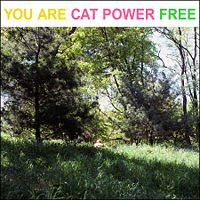 Like I mentioned in an earlier post, I was late to the Cat Power game. I had heard her (Chan Marshall, if I didn't mention her actual name before) stuff before, but this was the first record that I really listened to. My girlfriend at the time had picked it up, and it was on repeat in our apartment for a good few weeks.

I think I was initially drawn in by the infectious hook of "Free," the second track, but once the song ended, I found myself listening to the rest of the disc. "Free" is one of the more upbeat numbers, but it's really no less sad and affecting than the rest of the songs. It's not surprising that the tone is morose, but she manages the difficult feat of having songs that are both depressing and strangely uplifting. Sometimes it's one or the other, but tracks like "Shaking Paper" manage to accomplish both.

I always ended up back at the beginning, and I slowly became infatuated with the first song, "I Don't Blame You." Whether this song is about Kurt Cobain or not (I have a hard time believing it's not, though it's never been confirmed), I found it really hard to resist. My 90's coming of age has left me powerless against any sentiments aimed at Cobain (he still remains one of the only things I cornily hold sacred), and if that is part of the reason I love the song so much, than so be it. It remains, for better or worse, my favorite Cat Power song.

I picked this LP up sometime in the last year, after not hearing it for a few. I've sunk right back into it. But it can leave me a bit depressed, so I dole it out in small doses.