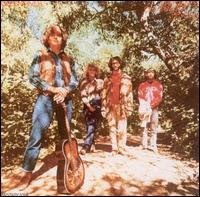 This is another one of those Hong Kong LPs I mentioned in one of my earlier posts about Johnny Cash. I really don't know why I've held onto this record. I never listen to it. But here's the thing: I think I secretly like CCR. I mean, I couldn't get deep into it, because Fogerty's voice has got to induce involuntary hair-pulling at some point, but I really think they're a pretty badass band.

Still, I don't know why I have this album, and only this album. It does have "Lodi" on it, which is a sweet song. But, it has "Bad Moon Rising," which I could go without hearing for the rest of my life, and be fine with. And really, my favorite song of theirs is "Fortunate Son," and it's not on here. I should probably get the one with that song on it (Willy and the Poor Boys). We'll see if that happens.

As it stands, this is my only "Creedence" album, and I'll have to live with that. It's one of three they put out in 1969. Not bad. I guess it helps when they're all 30 minutes long, but what the hey.

"Green River"
Posted by Wockenfuss at 2:48 AM

You can't really go wrong with Creedence. "Fortunate Son" may be the first "punk rock" song ever written. Don't punish Fogerty for his embarrassing solo career. Admire the fact that they had political songs on the radio and hate each other so much these days (Talking Heads-style) that they refuse to play together. I don't know why but I love when great bands end up hating each other. You know, the Minutemen loved Creedence so much that they would cover their songs non-ironically. It takes pretty monumental balls to bust out "Green River" at a 1982 punk show. Word.