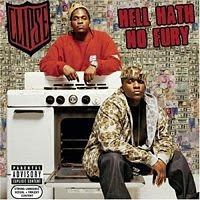 I'm not going to lie. I used to watch the video for Clipse's "Grindin'" every time it was on TV in 2002. I didn't really care for their raps, but that empty beat just really worked for me on some level. I thought about buying the record, never did, and eventually moved on.

When this one came out, they were all over the place again. I kept reading about how it was easily the year's best rap record, some sort of masterpiece, etc. I randomly found a used promo copy of it shortly after its release, and since the price was right, I figured I'd give it a shot.

It's just not my thing. I can see why people like it, and while I initially wasn't turned off by it, it just seemed (and still does) like it's one long song. One sparse, slow, drone-ish song, either about how much coke they move or how they got fucked by their label.

Some of the beats are cool, but they border on formulaic about halfway through. And honestly, I just can't get behind songs like "Ride Around Shining." While this is better than a lot of the shit that passes for popular rap these days, it's nothing new. And I'm still trying to figure out why everyone was acting like it was.

"Keys Open Doors"
Posted by Wockenfuss at 1:47 AM