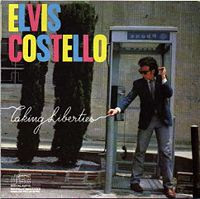 Elvis Costello was prolific enough in the late 70's to warrant a b-side compilation after four albums in under four years. Not bad.

I don't know this record very well, though I have owned it for years. It is a b-side compilation (though it does include a few other odds and ends), so the songs clearly weren't seen as fit to be "album material." But, they're nothing to scoff at.

The previously unreleased "Clean Money" is a nice opener, and "Radio Sweetheart" has an odd 50's swing feel to it. Nice to see him mix it up with a strange stylistic choice, but you can see why it wasn't included on an album.

There are 20 songs here, and while a lot of them are short, none are misplaced throwaways. An interesting mix, and certainly a treat for what I'm sure were the large group of hardcore Costello fans at the time.

"My Funny Valentine"
Posted by Wockenfuss at 11:16 PM