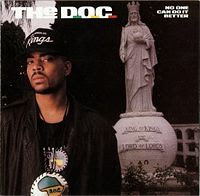 The D.O.C. has always been considered a founding member of NWA, but he only appeared on one song from Straight Outta Compton, (though he is on the cover) and by the time their second record rolled around, he had been rendered virtually voiceless by a car accident (but I think that's him on "Don't Drink That Wine"). So while he may "officially" have been a member of NWA, he's usually considered by fans to be a member of the NWA posse.

This record dropped after Straight Outta Compton and before any other NWA records had been released. It's also notable for having the last song (I think) to feature Ice Cube when he was still a member of the group. Dre does the beats, Yella does the cuts, and The D.O.C. does a great job of both repping NWA and positioning himself a little to the side of their hardcore image.

While The D.O.C. could get a little foul-mouthed here and there, this record isn't big on the profanity. Which is fine, but when I was a 13 year old kid buying this cassette, I was hoping for some street talk. You don't get that, but you do get a young dude dropping some great lyrics over some early and equally great Dr. Dre beats. While the NWA guys were decent lyricists, that usually took a back seat to the shock value. D.O.C.'s out to prove he can get by without that noise - and he can.

Tracks like "Whirlwind Pyramid" and "Portrait of a Masterpiece" are my favorite kind of hip hop: fast and witty, with sparse music during the verses that breaks loose in the chorus. Late 80's hard-driving shit you can barely keep up with. I love it.

It wraps up with one of my favorite rap songs ever, the indelible "The Grand Finale," a song that, as I mentioned, features Cube-era NWA at their absolute peak of performance, over a beat that is incredible. It also features the classic Eazy-E line (no doubt written by Ice Cube): "Fuck a car, I'll do a motherfuckin' walk-by." Undeniable.

This is an oft-forgotten classic from the golden era of rap and the true beginnings of real gangsta rap.