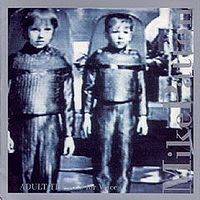 When a friend of mine told me that he had just picked up a Mike Patton solo album (this was probably around 1997), I was excited. Very excited. My pals and I were all intense Patton devotees, and while the idea of him releasing an album on his own had certainly occurred to us, we never thought we'd see it happen. But it did.

And I've owned it for over ten years and I've probably listened to it all the way through twice.

While the idea of Patton taking a four-track recorder with him on tour and recording weird vocal noises on it in different hotel rooms is intriguing, and the final products is indeed interesting, it's not something you're going to listen to very often. Or really at all, unless you're trying to get people to leave a party. I think I may have done that once.

Attempting to explain what this sounds like is impossible, so I won't bother with that. This is just one of those CDs that I like to have on my shelf. I'll probably keep it forever. If nothing else, the song titles are amusing: "I Killed Him Like a Dog...And He Still Laughed," "Hurry Up and Kill Me...I'm Cold," and "A Smile, A Slap In The Face, A Fart, A Kiss On The Mouth" are among my favorites.

"Pajama Party Horror"
Posted by Wockenfuss at 1:23 AM

Email ThisBlogThis!Share to TwitterShare to FacebookShare to Pinterest
Labels: CD, Other

We all know that "The Man In The Lower Left Hand Corner of the Photograph" is the jam.

Onug was famous at Wherehouse for playing this album over the loudspeakers while the regional manager was in the store. Dude was unstoked.