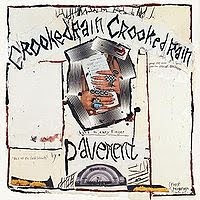 I long ago gave up on having a favorite Pavement album. I can think of as many reasons why this one is my favorite as I can for Slanted and Enchanted. And for a while, I was convinced that Brighten the Corners was the best one. It really depends on which one I'm listening to at the time.

Pavement's sophomore record is just as good as their first one, and definitely more accessible. The recording quality has improved vastly, and Stephen Malkmus' knack for melody comes through even clearer. Songs like "Gold Soundz," "Unfair," and "Elevate Me Later" are some of the best songs the band ever recorded. This was the golden age of Pavement. Crooked Rain, like their debut, doesn't have a bad song on it. "Fillmore Jive" is a bit much, but as a closer, it works perfectly. It's a nice finish, a great topper for the perfection that proceeds it. Talk about your great sophomore records. If anyone wondered if Pavement was going to be a one-off, they got silenced by this album.

People tend to remember this album for the almost-hit that was "Cut Your Hair" and the Billy Corgan/Stone Temple Pilot disses that overshadow the beauty of "Range Life," but there's obviously much more to it. "Stop Breathin'" and "Heaven is a Truck" are both starkly beautiful songs, and much less straightforward than the band's previous slow-jam, "Here." It's not that Malkmus' songwriting has improved by leaps and bounds - it's more a sensible maturing that continues to this day. Every album he puts out - both with Pavement and solo - seems like the next logical step in his songwriting. And so it is with Crooked Rain, Crooked Rain: It still sounds like the Pavement from S&E, but it's not a sequel. It's a whole new thing that retains the key elements of what came before. (They also had a new drummer and recorded the album as a full band this time around.)

I think this album is a great place to start if you're looking to get into Pavement. S&E can be initially off-putting, but on this one, when "Silence Kit" gets rolling, you'll be hooked. Sure, it sounds a lot like "Everyday" by Buddy Holly, but that's part of its charm. And by the time you reach the one-two punch of "Unfair" and "Gold Soundz," there's no turning back. For a lot of people, this is the definitive Pavement record. I don't think it's possible to really pinpoint one to cram into that category, but if you had to, this one ain't a bad choice.

For the consummate fanboy, this deluxe edition is overflowing with extras. I'm pretty sure the entire second disc is previously unreleased material, and there are eight songs on it that were recorded after S&E but before Gary Young left the band. So if you're a Young fan (and aren't we all?), these are some incredible tracks to hear. There's also some early versions of songs that would end up on the next record (Wowee Zowee), alternate versions of songs from Crooked Rain (most with vastly different lyrics), another Peel Session, and just shit-ton of other ephemera. It's a Pavement nerd's dream. Some of it is rough, but I never have any problem listening to this thing all the way through.

My favorite Pavement record? It has been. It could be tomorrow. It's really, really good.

Do you know why I hate Pavement? Because "Gold Soundz" is an incredibly perfect song. It makes me hate them because they let you know what they can do, if they feel like it, just to tease you. This is probably my favorite record of theirs, although I should say that I have never quite fully given myself over to them. I know I am the one who is wrong but honestly, I don't get the hype. I know, I know. Oh, and "Range Life" and "Unfair" are pretty sweet tunes.