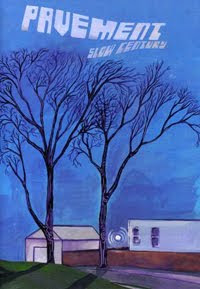 If you're a Pavement fan, you already own this. Or you've at least seen it. Or you haven't seen it and you're an idiot. If you're not a Pavement fan, you'd probably still enjoy the 90-minute documentary that makes up part of the first disc of this set.

It's actually a pretty straightforward documentary of the band, containing both old and new interviews, some rare footage, and tons of random stuff. Sadly, no current interviews with Gary Young, but you can't have it all. I have watched this documentary at least once a year since it came out, and it always welcomes me back with open arms. It's just that nice. And because it's a music documentary, Thurston Moore's in it. So there's that.

The second part of the first disc contains all of the band's videos, along with alternate versions for three songs. Pavement's videos reflect their music nicely, by being both witty and frustrating at once. It works. The videos also have commentary by some of the band members, but I haven't listened to those in a while. Can't remember if they're any good or not.

The second disc is one full live show and one partial live show, both sets being from their final tour. Each of the concerts are shot with two (maybe three on one of 'em?) cameras, and you get to use your "angle" button - or whatever it's called - to control which camera you see the show from. Pretty cool use of that DVD feature, which rarely gets taken advantage of. The live shows are great, though it's towards the end of the band's existence, so you sort of get the vibe that Malkmus doesn't want to be there. Still, he tears through some nice guitar work and definitely seems enthused in parts.

There's a few easter eggs with some bonus live footage, and all in all, this thing is long as shit. I have watched all of it way too many times. It's actually one of my favorite music DVDs. Shocking, I know. Seriously though - if you like the band and you haven't checked this out, you're a sucker. Get with it.

Sweet clip here.
Posted by Wockenfuss at 12:29 AM