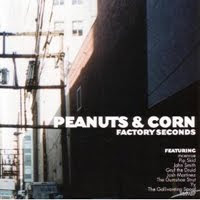 I picked up this CD at the same time I bought the Park-Like Setting album, when my brother and I saw mcenroe and Pip Skid live many years ago. Apparently I had both of them sign this one. mcenroe wrote, "mcenroe is kar-oké king!" and Pip scrawled (with an arrow pointing to mcenroe's signature), "this guy is a genius!" And then he circled a dollar sign and signed his name. So hard, those two.

So this is a collection of P&C odds and ends that I have not listened to in years, and now that it's almost a decade old, it's even cooler. Lots of random stuff from the main dudes on the label, and I'm always a sucker for unreleased tracks. And it includes the "CD-ROM" (remember that?) version of Pip Skid's "Hypochondriac" video.

Not too much else to say about it, because I really have not heard this in forever. But if you're a fan of the label (and you should be), this is obviously essential listening. So get on board.

"Hypochondriac"
Posted by Wockenfuss at 1:14 AM

This is a pretty sweet comp. Mcenroe was in such a zone back then that even a good amount of these "odds and ends" are outstanding songs. The opening three tunes are pretty astounding, with Pip Skid's "I Can't Front" being the real stand-out. "Battle Cry" is a classic John Smith song from the golden age where he was straddling the line between geek and thug. Ah, those were they days. Mcenroe's "Good Corporate Citizen" is one of the best songs he ever did and its a shame that it was relegated to the end of this random compilation. "Peg City Holla" with Pip and Yy is another song that always gets me going. It contains one of my favorite lines, courtesy of Yy: "When I rhyme, emcees write me apology notes." I don't know why but that just rules to me.

Nice work on the autographed copy.