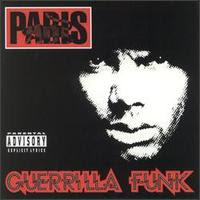 Up to this point, Paris always struck as me as the sort of guy who didn't give a fuck about trends. He was the hard-ass who just wanted to blister mics and kill the white devil. It was on Guerrilla Funk that I began to wise up to the fact that maybe, just maybe, Paris wasn't exactly who I thought he was. (I've since found out that he's not anything like I thought he was. Not that it matters - I still love the guy's music.)

I go back and forth with this record. For a while, I really didn't like it - it struck me as a blatant attempt to cash in on the g-funk shit that Dr. Dre had already lit up the West Coast with, and a late attempt at that. Paris even samples a few of the same songs that Dre used on Doggystyle. And while the Parliament sound may have been a cool move if used to mix it up on a few tracks, listening to it for an hour straight gets a little tedious. On top of that, Paris just doesn't sound as hard rapping over warbly synths and big-funk basslines. His voice almost cuts through it, but I find myself really missing the ruggedness of his beats.

In fairness, his first two records were fairly similar, so I do respect the fact that he mixes it up here. But then he does a track like "Back in the Day," which is just a weaker version of "The Days of Old" from Sleeping With the Enemy. And "Outta My Life" is possibly the worst Paris song ever. Corny beat, and even his lyrics seem like a half-assed stab at making his own version of "Dead Homiez." That's oversimplifying it, of course, but you get the idea.

Still, there are some bright spots on this record, and I don't want to make it seem like there aren't. "One Time Fo' Ya Mind" lays off the funk and sounds like vintage Paris, and "It's Real," aside from it's way-too-familiar sampling, is a solid opener. Still, this album can't help but sound severely dated now, and even though Paris drops some fine lyrics throughout, the whole thing is overshadowed by the weird P-Funk theme.

Paris must have agreed that it wasn't his finest work, because he disappeared for a while after this one.