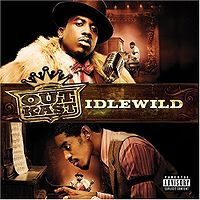 I can't believe it's been four years since the last Outkast album. Not really the soundtrack to the film of the same name as much as it's an accompanying album, this record was initially challenging for me to get my head around. I've since come to appreciate it for what it is, and now I legitimately enjoy the shit out of it.

While the two members of the group clearly were still working separately on the songs for this disc, they made the wise move of grouping all their individual tracks into one album, and it makes for a pretty sweet mix of music. (And if you don't like it like that, divide the tracks up in iTunes. Since the album is almost 80 minutes long, you can make two nice little mini-albums out of it.) As usual, some of André's cuts can get a little sprawling, but in the whole scheme of what they were trying to pull off here, I think they all work. The notable exception might be the warbly weirdness of "A Bad Note," but they wisely put that one at the end.

While I normally have beef with the sequencing on Outkast records, they really nail it on this one. "Mighty 'O'" is the perfect lead-off track (after the too-long intro), featuring both dudes dropping some solid verses over a click-clacky track that totally works. "Peaches" is sparse with the backing track, but Big Boi fills it out with some uncharacteristically subdued verses. It's an odd cut, but it's grown on me. André's "Idlewild Blue (Don'tchu Worry 'Bout Me)" is one of the handful of singles from this album (along with "Mighty 'O'" and "Morris Brown") that should have been a way bigger hit than it was. He finally found the perfect vehicle for his singing voice, and it's a great song.

The album starts off single-heavy, but the songs that follow and the ones that are interspersed early on are some damn fine 'Kast deep cuts. "The Train" is dope smoothness, "Buggface" is a solid quick one, and all of André's cuts are more Prince-y than ever, which is fine by me. You could argue that things start to lag somewhere in the middle (I could really do without the Lil Wayne and Snoop Dogg guest spots), but once you get into the groove of the thing, it moves nicely.

I can still listen to this one because I never burned myself out on it. Revisiting it this week has been nice. Still, I'm ready for some new shit.

"Idlewild Blue (Don'tchu Worry 'Bout Me)"
Posted by Wockenfuss at 1:36 AM

I have never really fully gotten into this album. It opens strong and seems to peter out for the second half. I might take your advice and reorganize it into 2 shorter albums. As a whole the album feels overwhelming and uneven to me. There is a high amount of R&B and singing on here which immediately interferes with my enjoyment of it. I don't know who Janelle Monae is but she needs to shut up. I figured all of the singing had to do with the movie but when I saw the movie only a couple of the songs were in it (and not the ones I necessarily thought were).

That being said, there are some great songs on here. "Peaches," "Morris Brown" and "The Train" are all standout songs. "The Train" makes me want to cry and I can never help but sing along with "Morris Brown," one of the rare rap tunes where I don't find the singing to be obtrusive. I also dig Dre's "Life Is A Musical" but don't get "Idlewild Blue," especially as a single. For me, "Morris Brown" should have been the huge hit.

The weirdest thing is that I really like the song "Hollywood Divorce" and hate to admit that one of the big reasons is because of Lil' Wayne's rap. It is awesome. I used to rewind it and listen to it over and over. Snoop ends up sounding like a child following Dre and Big Boi though, and kind of kills the song at the end. But the beat is sweet and the first 3 raps are pretty sweet.

I should really give this album another shot in the near future.