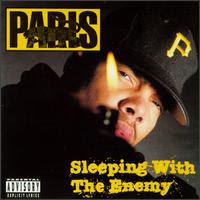 When I was still in high school - this would have been around 1993 - I used to go down to Eugene and visit my off-and-on girlfriend who lived down there (long story). She lived in a house with a few girls, but there were always random people hanging around. I got to know a couple of guys who were always over there, through various Boone's-drinking, bong-hitting, and music-listening. One of the guys' names was Paul, but everybody called him P-Dog.

One night we were playing this idiotic game that P-Dog liked to play where you took a bong hit, held the smoke in, took a pull from a 40 of OE, ate a cookie, and then blew the smoke out. Seriously: I had to be seventeen to think this was as awesome as I did. Anyway. P-Dog and his friend had great taste in hip hop, and on this night, they were rocking something I'd never heard before. I was extremely out of it, but this music was blowing my mind. I asked them what it was, and they flipped me the CD. Paris. Sleeping With the Enemy. Just then, his voice rattled out of the shit speakers: "P-Dog the Bush killa." Ah.

We listened to the CD on and off whenever I was down there, but I would always forget to buy it. Which was weird, because I loved it. In fact, I don't think I picked it up until a few years later. I can't be sure of that. But I know I had it when I was 19, because I was fucking immersed in it by that point. (I put "Coffee, Donuts & Death" on a mixtape that year for my girlfriend, for chrissake. She hated it, and rightfully so.) Maybe I bought it the year before? It doesn't matter. I bought it, listened to it, and wondered why in the hell it took me so damn long to buy this album. Because it is amazing.

It's frustrating that Sleeping With the Enemy has become more well-known for its cover and content controversy (more about that here) than it has for its music. This is Paris' crowning achievement, an album that, while well-received at the time and still highly regarded in some circles, never got the universal props it deserved. The way this thing flows together as a collection of songs is seamless, and the beats that Paris put together manage to be more diverse, more powerful, and even more catchy than the ones he crafted for his debut.

"Make Way for a Panther," "Sleeping With the Enemy," and "House Niggas Bleed Too" are the first three proper tracks on the album, and they're all insane. Turns out they're just the prelude to the murder fantasy that everyone whined about, "Bush Killa." It's a great song, and that's all that matters. That's all that should have mattered. Anyway, the album starts out in mega-fierce mode (good move), but Paris mixes shit up as it goes along. "Assata's Song" and "The Days of Old" are both mellow and thoughtful tracks, and he pulls them off with ease.

Still, this album is at its best when he comes with the hard shit. "Guerrillas in the Mist" is actually part two of "Break the Grip of Shame" from The Devil Made Me Do It (it uses the same beat, even), and it sounds even grittier than it did the first time around. "Conspiracy of Silence" features Son Doobie from Funkdoobiest (listed in the liner notes as "Sun Dubious") and L.P. (?) and is one of the more bouncy tracks that Paris made up to this point. He also throws in some shorter, interlude-y cuts, as well as some slower knowledge-droppers. Great sequencing, great composition. Great one to listen to on headphones.

Oh, and a fun fact: A young DJ Shadow did some of his first recorded work on this record.

Many years ago, a friend of mine who worked at a record store unearthed an original, sealed copy of this CD, still in its longbox. Needless to say, it remains untouched and is on a shelf in my front room.

I was one of those people that you forced Paris on with numerous mixtape appearances and I'll have to say that it worked. While I don't listen to this a ton it certainly has a time and a place. My jams are "Sleeping With The Enemy," "Bush Killa," and "Coffee, Donuts, And Death," the latter which gave me endless enjoyment as a younger man. This is the only Paris album I own but it always seems to do the trick when I want to hate stuff. I should totally work out to it. Good idea. I found listening to Ice Cube while working out does wonders.