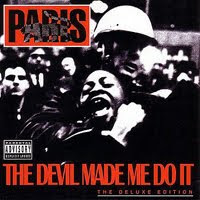 I had had my original CD version of The Devil Made Me Do It for a long-ass time, and I just recently found this Deluxe Edition in a store and decided to upgrade. It's odd in that it doesn't say specifically that it's been remastered, but that it's been "digitally enhanced and reworked, and has provided the artist the rare opportunity to improve on the the initial release by benefiting from advancements in technology previously unavailable." Pretty sure that means "remastered."

And that's what it sounds like. The original issue of The Devil Made Me Do It was, like a lot of other CDs released around the same time, really quiet compared to more recent discs, and the overall sound just wasn't great either. This edition sounds a little better, though it seems that the recording might have been a little budget to begin with. It doesn't matter. Paris is so angry, so pro-black, and so fed up with everything that a small nuisance like pristine sonic clarity isn't going to get in the way of him making his point. And, if you hadn't guessed it already, that point is, "fuck the white man." Fair enough.

And never have I so enjoyed listening to a man rail against my entire race. Paris is really the only rapper I've ever listened to who I genuinely think would be pissed if he knew I was buying his records. Sure, there's a lot of hip hop artists out there who talk the white man down, but come on. It's all part of the shtick. Paris not only lives it and raps about it, he backs up all his claims with historic precedents, to the point where I can't help but agree with him.

So why do I listen to the records of a guy who I know for a fact thinks of me as the enemy? Because the dude's an incredible rapper and producer, and if I'm going to listen to pissed-off rap, I want it to be focused in its anger and I want it to be smart. Paris is right up there with Ice Cube when it comes to pulling that off. And that's a huge compliment.

The Devil Made Me Do It is Paris' first LP, and though the beats sound fairly dated now, his voice sounds as clear and as relevant as ever. And don't get me wrong - the beats are dope as shit. I still love listening to the crazy-fast grooves of "Panther Power" and "Wretched." I still love listening to the rest of this record, too. Paris is political, Paris is outspoken, and Paris doesn't make songs about having fun. My wife hates this record. So yeah, there's a time and place for it. If you've never lifted weights while listening to Paris, I highly recommend it.

The original CD version of this album already contained two bonus remixes, and this one only adds one more. But if you only had the original vinyl version, you'd be looking at five bonus tracks, because it not only didn't include any remixes, it also omitted two tracks ("Brutal" and "On the Prowl") that would end up right in the middle of the CD version. Kind of a weird move.

Paris ain't for everybody. But if you're curious, start with this one or his next one. They're both fantastic.