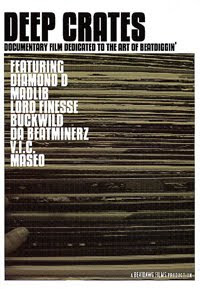 Here's the problem with doing a low-budget music documentary: You can't afford to get clearance to use any of the music that people are talking about in the film. As a viewer, this makes the film an exercise in either having to imagine the songs you know playing behind the person who's talking, or being frustrated because you have no idea what song they're talking about.

This is a really low-budget doc about crate-digging, and while the interviews look like shit (we're talking home video footage here), they do manage to be quite interesting. But when someone starts talking about how a certain sample was incorporated into a specific beat, you instinctively expect the song to start playing in the background. It doesn't, and it really makes the whole thing frustrating. They instead opt to use (at certain points) really non-descript beats that were provided by some random DJ, but even that is only every-so-often, so it's jarring when it kicks in.

The interviews with Lord Finesse and Diamond D are interesting if you have some point of reference for what they're talking about, but without any music (or any visual aids, I might add), this whole thing comes off as a hastily-made student film. That's not to say it's worthless. If you're a hip hop purist and you're interested in knowing about the roots of crate digging, you'll get some interesting info out of this. If you're a novice and just want to see a cool music documentary, this ain't the one for you.

There's a Part II that has Marley Marl in it and looks a bit sharper, so I'll probably check that out.

Watch a bit of Deep Crates here.
Posted by Wockenfuss at 1:05 AM