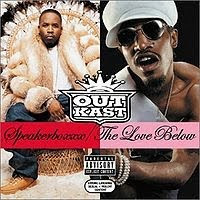 When I heard that Big Boi and André were going to release solo albums under the Outkast name and package it as one double album, I didn't really believe it would happen. The idea seemed crazily ambitious, and there was just too much that could go haywire. Of course, they proved me wrong, and the album went on to be certifiably mammoth.

"Hey Ya" became the song you loved and then the song you never wanted to hear again for the rest of your life (don't hear it much these days, do you?), but when it was good, it was great. Outkast played SNL right before the record came out, and when André busted that shit out while wearing this crazy green shredded bodysuit thing, I knew the song was going to be inescapable for the rest of the year. I had taped the episode, and I watched that performance over and over. I couldn't get enough of it. The song that Big Boi performed that night ("The Way You Move") was good too, but I always thought it was way too hook-heavy. In fact, I'd argue that it's one of the weaker tracks on Speakerboxxx.

And there's not many. The cut with Ludacris on it ("Tomb of the Boom") is ruined only by the fact that Ludacris is on it, and the track with Lil' Jon ("Last Call") is all kinds of stupid, but it's the last song, so whatever.

Otherwise, Big Boi's half is nothing short of incredible. "The Rooster" and "Knowing" are two of my favorite Outkast cuts of the last 10 years, and should be held up as an example of hip hop done right. If somebody makes a list of the top ten best living rappers and Big Boi's not on it, that list is worthless. Dude should be on there for this album alone. His rap on "Ghetto Musick" is untouchable.

I guess you probably either love or hate The Love Below. Me? I'm in the love camp. I was listening to it earlier today and remembered everything that I love about it: It's meticulously crafted but sounds loose, the lyrics are bizarrely brilliant, and the musicianship is, while not always spot-on, a blast to listen to. I'm just impressed that this thing exists. There had to have been people telling André that it was career suicide to release an album that is long as shit, features him mostly trying to sound like Prince, and has very little rapping on it.

But, the dude pulled it off. The Love Below isn't an album that you're going to have in your car stereo for weeks at a time, but man - when the time is right, it's a great record to listen to. There's just so much to it, and André's singing voice is so untrained and unpredictable that it lends itself to a certain charm. I could see how that - along with the long running time and general weirdness of the whole project - could turn some people off to this thing, but I've always really enjoyed it. I'm also a huge André fanboy, so that doesn't hurt. But I really think it's a smart record. And the hip hop world could use more of those.

This thing's a beast, and it's usually best tackled one album at a time. But if you haven't listened to it in a while, it might be time to check it out again. It's as good as you remember it. It's somehow better than I remember it.

Big Boi might be the greatest rapper on the planet. There. I said it. It's got to be him, Method Man, MJG, Ghostface or John Smith. I mean, words can't describe how into "Speakerboxxx" I was in 2003. And still am. It is hands down my favorite Outkast album. As you already said, there are only a few duds on it and the rest is simply flawless. The beats are insane and Big Boi rhymes out of his mind on every song. I too thought it was odd that "The Way You Move" was the single because not only is it somewhat generic, but it doesn't really sound like the rest of the record. "Flip Flop Rock," "The Rooster," "Knowing," "Bowtie" and "Unhappy" all would have been supreme single choices, especially "Unhappy." "Reset" is a personal favorite and "Church" finds Big Boi really letting loose.

As for "The Love Below?" I'll admit I rarely rock it anymore. I gave it quite a few spins when it came out but it never quite connected with me.

Problem No. 1: Whenever I listen to it I realize that I could be listening to "Speakerboxxx."

Problem No. 2: I don't really like Prince all that much.

Problem No. 3: I keep waiting for Dre to rock the mic. It never happens.

Problem No. 4: It's a few songs too long. There is definitely some filler here. Honestly, most of the second half is filler-tastic.

Oddly enough, the good songs on "The Love Below" are really good. "Love Hater" is a gutsy/great first song. I really liked "Hey Ya!" before I heard it 9000 times. And "Roses" is pure genius. The tune is incredibly catchy and clever. Then, Big Boi swoops in and delivers one of the greatest raps I have ever heard. I have rewound this rap for various people (usually inebriated) and made them listen to it as an example of why I love good rappers. The rhymes are clever and he plays with the beat in a way that I could never dream to attempt. It really is brilliant.

Now, can someone please explain to me why "She Lives In My Lap" was a single and in the movie "Idlewild?" Am I missing something?