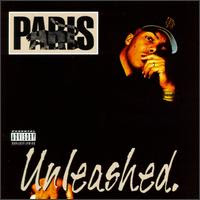 This is the only album that's not mentioned on Paris' website, and the first one for which there was no video released. It's also the first album that Paris released after breaking ties with Priority Records, who I'm pretty sure was the umbrella for the Scarface Records label that Paris ran. This album was released on Unleashed Records, which appears to be a part of Whirling Records, which I can find no info about. It has the Guerrilla Funk logo on the back, but instead of saying "Guerrilla Funk Recordings," like his next albums would, it says, "Guerrilla Funk Music Publishing (ASCAP)." These are not the only signs that this was a transitional period for Paris.

Inside the CD jacket, there's an ad for Unleashed Records that announces, "Introducing Jet and Nuttso...The Next Generation Coming 1998..." Yup, Paris was trying his luck with some up-and-comers. A really weird move from a guy who rarely had guest spots on his albums. An even weirder move: giving these guys solo tracks on this LP, with beats that he didn't do. And they're not even tacked on at the end - they're just mixed in with the other songs on the CD. Jet gets two cuts ("Everyday Livin'" and "Same Ol' Same Ol'"), while Nuttso gets one ("Thug Livin'"). All three of the songs are weak, typical gangsta rap, with beats that can't hold a candle to the shit Paris puts together.

Sort of weird but not really: Spice 1 shows up on two tracks on this disc, which would be really odd if they weren't both from the Bay Area and this wasn't the most gangsta Paris album ever. Seriously. P-Dog came out of hiding for what would end up being his only album in an almost ten-year span, and he brings some of the hardest shit of his career. "Blast First," "Record Label Murder," and "Street Soldier" are all badass cuts, with Paris calling out "wannabe G's" with a fervor that he hadn't mustered since '92.

He still gets political on a few tracks ("Root of All Evil" and "Conversation"), and somehow makes a gangsta-type love song (!) work on "44 Wayz." Yeah, this really is the odd Paris album. But I forgot how good it is if you take off the tracks with his little homies. The beats are solid, he sounds as pissed as ever, and "Street Soldier" remains one of his strongest cuts.

A few other things of note:

The Jet and Nuttso albums did indeed see release.

Apparently Unleashed was only released for a short time and in small numbers, and has become a bit of a collector's item. Though Amazon prices can't always be trusted.

This review was fascinating. Well done. Didn't I buy you this CD for Christmas one year?

You did, and it was a sweet surprise. Same with 'Sonic Jihad,' if I recall correctly.