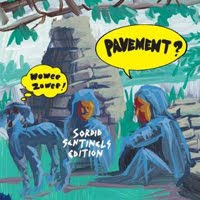 I've never really agreed with the all-too-common sentiment that Wowee Zowee is Pavement's most "experimental" record. It's maybe their most inconsistent, but they don't really do anything here that they didn't already do (in part, at least) on their first two records. Stephen Malkmus says in the Slow Century DVD that he - and I'm not going to get this word-for-word - "may have been smoking too much grass" during the writing and recording of this record. It's hard to tell if he's kidding or not, but when you listen to this LP, that assessment doesn't seem completely far-fetched.

Over the years, Wowee Zowee has gained the reputation as the most difficult Pavement record to wrap one's head around, but you've got to remember that that's a distillation that's mainly critic-driven, and definitely isn't universally accepted by hardcore proponents of the group. I've heard a lot of Pavement fanatics declare undying devotion to this record, even calling it their favorite. And while Pavement fans are certainly the type to try and out-cool each other, I'm sure there are a good amount who are completely sincere. Also: comparing almost anything to the first two Pavement albums isn't a fair fight. If this had been the band's first album, you can bet that people would have been pissing themselves over it. The group had just set the bar so high by this point, they really had almost nowhere left to go.

So don't let anyone tell you this isn't a great album. Because it is. And while there are some weird-ass songs on here, this album also contains some of the bands most accessible material. "We Dance," "Rattled By the Rush," and "Father to a Sister of Thought" are all catchy as heck, and found their way onto many mixtapes that I made in the mid-90's. And I can attest to the fact that finicky chicks dug it. That's when you know you're doing something right.

Other tracks, like "Grounded" and "AT&T" might not be as immediately hummable, but they'll grow on you quick. Just let 'em. I mentioned before that this was the first Pavement record that I really got into, and though it may not have been the ideal one for my real introduction to the band, it threw so many styles at me that when I went back and listened to their earlier stuff, it clicked with me instantly because it was all much more focused and, by comparison, somewhat cohesive. Wowee Zowee is, for all the great music it contains, jumbled in its execution. For some, that's a great thing. I've learned to enjoy that aspect of it, but this album has been my favorite Pavement record far fewer times than any of the other ones.

As with the previous two Pavement albums that had been reissued at this point, this one is jam-packed with extra tracks. This deluxe edition is a beast, and it contains a lot of stuff from the Wowee era, about half of which had never been released before. Not sure if I mentioned it before, but Pavement were great when it came to putting out singles and including non-album tracks on them. (Stephen Malkmus continues to do this, and it is awesome.) So, there were probably a lot of hardcore fanboys who's collections of import 12"s were instantly devalued when these reissues hit the streets, but for the rest of us, it's great to have all the b-sides assembled in one place.

So there's a handful of cuts from the "Rattled By the Rush" and "Father to a Sister of Thought" singles, as well as some other outtakes from the album's recording sessions. There's also compilation tracks (their version of the Descendent's "It's a Hectic World" is dicey at best), some stellar radio sessions, and a bunch of other randomness of varied quality.

This one is really for the hardcore Pavement fans. The eight-minute early version of "Fight this Generation" alone will make your girlfriend hate you. But as usual, the good outweighs the iffy. There are some real lost gems on this thing, and it's fitting for an album that might be one itself. Don't write this one off, and don't believe everything you hear about it. It's Pavement in the mid-90's for cryin' out loud. How bad can it be?

"Rattled By the Rush"
Posted by Wockenfuss at 12:58 AM

You sir, are wrong. Don't try and tell me that this album is awesome because you lose all credibility. I tried with this one. I honestly tried but there is little, if any, redeeming quality in this bloated, jammy mess. This album reeks of dudes who are really feeling their own crap, the indie rock equivalent of shitty, prolonged blues guitar solo at a state fair. Why people would get together to write and play songs that are neither creative nor somewhat catchy is beyond me.

"Half A Canyon" has to be their worst song. "AT&T, "Black Out," and "Father To A Sister Of Thought" are the only songs I somewhat dig. The rest is a tedious, self-indulgent bore.