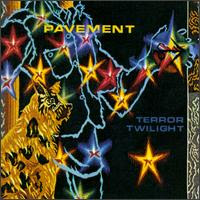 This is Pavement's final album, and the only one to have not yet seen a deluxe edition re-release. There's apparently one in the works for this year, though no track listing has surfaced yet. I'm really curious to see what's going to be on it, because some of the b-sides from this record were included in the bonus material for Brighten the Corners already. I think there's still some stuff left over from the "Major Leagues" single/EP thingy, but I'm wondering if they're going to be able to pad this one out enough to make a double disc. We shall see.

This is the oddball of the Pavement catalog, not only for being their final studio release, but also for the way it sounds. Nigel Godrich (best known as Radiohead's producer) took to the boards on this one, and the sound he got out of the band is decidedly different than anything they'd attempted before. It's cleaner, fuller, and just way bigger and more defined. I have a feeling this is a point of contention for some Pavement faithfuls, but I've never heard too much griping. It probably helps that this is a really great set of songs.

"Spit on a Stranger" is the opener here, and in classic Pavement fashion, a beautiful melody and breathtaking arrangement are saved from any chance of real radio success by lyrics that betray the music behind them. A sweet move, and an incredible song.

"Major Leagues" and "Carrot Rope" were the other singles from this record, and while I think "Carrot Rope" is one of the band's best songs (and a perfect one to be the last track on their last LP), "Major Leagues" has never been one of my favorite tunes from the group. It's a fine song, but they'd tackled the same idea on earlier albums with stronger results ("Father to a Sister of Thought," "Shady Lane"). Still, an un-fantastic Pavement single is still bound to be pretty good, and it is.

But it's the deeper cuts on this record that always come back to get me. The trio of "Billie," "Speak, See, Remember" and "The Hexx" that come towards the end of the record (right before "Carrot Rope," actually) is a fantastic batch of songs, and begin what is a great closing for the whole thing. In fact, "The Hexx" may be my favorite song on this entire album. It starts slow, builds, and just busts shit wide open by the time it's done. I like songs like that.

Like all the other Pavement records, this one was definitely my favorite for a while. While I definitely prefer their sloppy goofiness, I'm glad they made a record like this before they called it quits. Ultimately, I don't think the big-budget studio sound agrees with the band, but it definitely agreed with the songs they (or Malkmus) were writing at the time. They never made a bad album. Not even close. And that's tough to say about a lot of groups. This one may not float everyone's boat, but if you start with the catchier tunes and work your way around, it's really worth it.

So get with it. While I go stare at my Pavement reunion tickets that are magneted to my fridge. September can't come soon enough.

I know its unpopular but I kind of dig this record. I don't know why but overall I find it pretty agreeable. "Spit On A Stranger" and "Major Leagues" are both pretty awesome songs. However, my wife clowned me pretty hard when "Carrot Rope" came on during the shuffle one day. I think she compared it to Barenaked Ladies. I felt pretty ashamed.