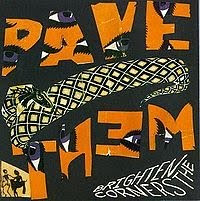 I went through a phase where this was the only album I listened to for like a year. Or at least it felt like a year. Maybe six months. Whatever the length of time was, it was significant. I fell hard for Brighten the Corners, and I've never looked back. If you catch me in the right moment, I might even argue that it's their strongest record.

In the whole scheme of things, this is usually viewed as the "return to form" record after the weirdness that was Wowee Zowee. I don't really see it like that, because much of Brighten is just as goofy, warbly, and scatterbrained as the record that preceded it. But, it somehow feels more focused, and really does work better as a whole record.

This is Pavement after the fast start, after the rollercoaster ascension, and after the awkward album that may or may not have been intentionally so to scare off fairweather fans. Wowee Zowee seemed to wipe the slate clean, and Brighten the Corners finds the band sounding more comfortable than ever. "Stereo" is about as playful (it seriously borders on dicking around) as they ever got, and used as the opener here, it seems to want to set the tone for a freewheeling collection of songs. "Shady Lane" is almost as fun-loving, but "Transport is Arranged" is thick and semi-dark, a song that threatens to trudge but never does. I love that song.

Two of my other favorite Pavement songs of all time are on this disc, the explosive "Embassy Row" and the shatteringly beautiful "We Are Underused," which features a melody that I can never shake. The lyrics are as spaced-out as ever (this was the first record where a lot of Malkmus' lyrics seem to make no sense no matter which way you spin them), but it makes no difference. The song is huge, and ushers in the last third of the record, which is always better than I remember it being.

Spiral Stairs has two tracks on this record ("Date w/ Ikea" and "Passat Dream"), and they're both pretty good. His voice just can't always hack it, and though he tries to sound as intentionally fuck-all as Malkmus, it never quite works as well. Whatever: his songs are upbeat on this record, while Malkmus is often in slow mode. "Type Slowly" and the wonderful "Old to Begin" are both slow-but-awesome, and so are a lot of the other tracks on this album. Awww - Pavement was growing up.

So, like I said, there was a time when this was the Pavement record for me. I had such a boner for "Embassy Row" (still do) that I used to listen to this record solely to hear that song. And then I realized that I love every other song on this thing. And then I had to take a break from it because I was listening to it way too much.

But by the time the deluxe edition came out, I was ready to get back into it. And get back into it I did. The bonus material on this one is on par with the previously re-released records, and features some really great stuff. Some of it requires explanation, like, "why are there two versions of "The Hexx" when that song was on their next record, not this one?" and "Why are the b-sides for the "Spit on a Stranger" single included on this release when that song was also on their next record?" The answer is usually the same, and always a great one: The people who put these collections together are incredibly meticulous about keeping things era-appropriate, and they always go by when things were recorded, not when they were released. Man, I love that sort of attention to detail.

The bonus material is a lot to sift through (more radio performances, another Peel Session, a gang of outtakes), but it's almost all worth it. There's a ton of previously unreleased stuff, and again, having all the b-sides collected in one place is great. Matador also did a super-sweet Buy Early Get Now deal for this record, which included two extra tracks and a live LP. You know I got on board with that shit.

This is the album of theirs that I have spent the most time with. Fargo bought this on LP when it came out and for some reason I can't remember he loaned it to me for like 2 years. I immediately loved "Stereo" and "Shady Lane" and always found myself wishing that the rest of the record lived up to the strong opening. I still do. "Shady Lane" is incredible and once again just infuriates me that Malkmus doesn't write more obviously catchy tunes. He is certainly capable. "Embassy Row" is an OK song but I don't get your boner for it. I also haven't listened to it 100 times. This is my 2nd favorite album of theirs.